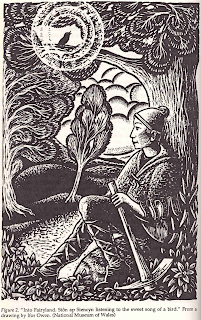 I recently happened upon not one but two unrelated references to the traditional Welsh fairy story of "Shon ap Shenkin" (or "Sion ap Siencyn") that Kenneth Morris retold (see here).  The first is an illustration for the tale, by Ifor Owen (1915-2007), a Welsh artist and educator who published Hwyl (1949), the first children's comic in the Welsh language.  In The Good People: New Fairylore Essays (1991), edited by Peter Narváez, there is an an essay on "Fairylore: Memorates and Legends from Welsh Oral Tradition" by Robin Gwyndaf, who mentions the "Sion ap Siencyn" tale, but more interestingly reproduces Ifor Owen's illustration for the tale.  It doesn't say when Owen made the illustration, or whether he had encountered Kenneth Morris's version of the tale, but it is of such quality that it is worth sharing here.

The second reference is in an old book, British Goblins: Welsh Folklore, Fairy Mythology, Legends and Traditions (1880) by Wirt Sikes, in a discussion of the legend of the Birds of Rhiannon in the Mabinogion (“Branwen, Daughter of Llyr”). This represents the only pre-Kenneth Morris appearance in print of the Sion story that I have so far found. I copy the passage (and its one illustration, depicting the rather macabre ending that Morris did not use) below.  Note that Wirt Sikes sets the locale of the story as Carmarthenshire, which is where Kenneth Morris was born in 1879, and where he lived as a young boy, until the age of six or seven.

This enchanting fancy reappears in the local story of Shon ap Shenkin, which was related to me by a farmer’s wife near the reputed scene of the legend. Pant Shon Shenkin has already been mentioned as a famous centre for Carmarthenshire fairies. The story of Taffy ap Sion and this of Shon ap Shenkin were probably one and the same at some period in their career, although they are now distinct. Shon ap Shenkin was a young man who lived hard by Pant Shon Shenkin. As he was going afield early one fine summer’s morning he heard a little bird singing, in a most enchanting strain, on a tree close by his path. Allured by the melody he sat down under the tree until the music ceased, when he arose and looked about him. What was his surprise at observing that the tree, which was green and full of life when he sat down, was now withered and barkless! Filled with astonishment he returned to the farmhouse which he had left, as he supposed, a few minutes before; but it also was changed, grown older, and covered with ivy. In the doorway stood an old man whom he had never seen; he at once asked the old man what he wanted there. “What do I want here?” ejaculated the old man, reddening angrily; “that’s a pretty question! Who are you that dare to insult me in my own house?” “In your own house? How is this? where’s my father and mother, whom I left here a few minutes since, whilst I have been listening to the charming music under yon tree, which, when I rose, was withered and leafless?” “Under the tree!—music! what’s your name?” “Shon ap Shenkin.”  “Alas, poor Shon, and is this indeed you!” cried the old man. “I often heard my grandfather, your father, speak of you, and long did he bewail your absence. Fruitless inquiries were made for you; but old Catti Maddock of Brechfa said you were under the power of the fairies, and would not be released until the last sap of that sycamore tree would be dried up. Embrace me, my dear uncle, for you are my uncle—embrace your nephew.”  With this the old man extended his arms, but before the two men could embrace, poor Shon ap Shenkin crumbled into dust on the doorstep.   (pp. 92-94) 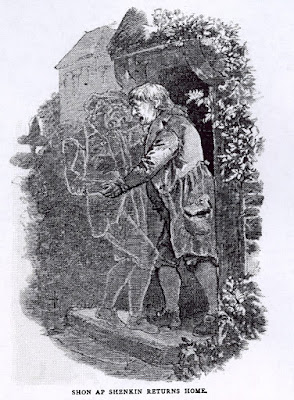 Posted by Douglas A. Anderson at 1:00 AM No comments:

I recently watched the DVDs of the 1969-70 Granada series The Owl Service, scripted by Alan Garner himself.  I can't say that I enjoyed it any more than the book, which I found rather a muddle of interesting ingredients and annoying characters. One of the points for me to watch the series was that most of it was filmed at Poulton Hall, the home of Roger Lancelyn Green (1918-1987), the friend and biographer of C.S. Lewis, and the author of many books for children and about children's writers. Still, in the end, I think I would have preferred a documentary about Poulton Hall to the rather incoherent and (it must be admitted) silly story-line of The Owl Service.

Included in the DVDs with the series is another 25 minute program, Celebration: Alan Garner—The Edge of the Ceiling (1980), which is a documentary about, and starring, Garner himself.  This was far more interesting than The Owl Service.  It makes you realize just how personally absorbed Garner is, and why his newer books have progressively retreated from accessibility for the last forty-odd years. Garner had some quite interesting observations, a few of which I jotted down and share here:

"And so I don't make any excuses whatsoever for drawing on fantastic materials to make comments seriously about modern life."