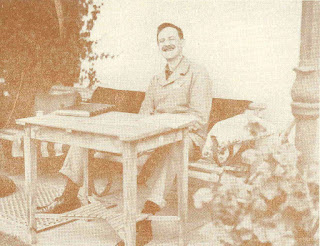 A recent acquisition is an odd, college magazine, The Oread Magazine from the University of Kansas in Lawrence.  This issue is dated March 23, 1920, and the reason for my interest is an interview with Lord Dunsany from his 1919 lecture tour of America. The interview, by Francis Herbert Stevens, is accompanied by a photograph headed "Lord Dunsany Greets You With a Smile"--which is I think the only photograph of Dunsany that I've seen in which he sports a toothsome smile. A scan accompanies this post (at right).  Otherwise, the most interesting quote from the interview is as follows:


I have no settled form of philosophy that I am aware of, except that I think one should write from the heart what is actually in one's heart. Then, one will be sincere. I do not put any hidden meanings into my play[s]. The stories are there as plain as starlight. Let each one find his own meaning in them.  I wrote my plays to be acted, not to be read. If I had written them for reading I should have put them in story form.