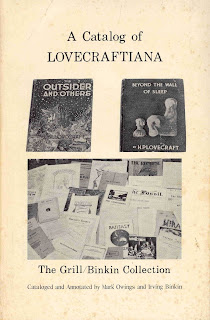 In 1975, Jack Chalker's Mirage Press released a two thousand copy edition of A Catalog of Lovecraftiana: The Grill/Binkin Collection, cataloged and annotated by Mark Owings and Irving Binkin. Five hundred copies were cloth-bound, the rest were bound as trade paperbacks. From the vantage point of nearly forty-five years later, the catalog seems very bizarrely arranged. It includes 668 numbered items, the vast majority (the first 586 items) were collected by the first owner “Jack” Grill, with the remaining 82 items added by Irving Binkin as “Recent Additions” after Binkin acquired the collection. The main section of 586 items is divided into seven sections, 1) Professional Periodicals; 2) Amateur Press Works; 3) Books by Lovecraft; 4) Anthologies, Novels and Author Collections with HPL Material; 5) Books about Lovecraft; 6) Letters; 7) Photographs and Miscellaneous. Most of these sub-sections are repeated twice in the “Recent Additions” section.

The catalog also has short note by Irving Binkin in dedication to “Philip Jack Grill,” and a short introduction by L. Sprague de Camp. The use of “Philip Jack Grill” is somewhat erroneous, for “Jack” was Grill's nickname and doesn't seem to have been part of his legal name. He was born Philip Grill in New York on 29 June 1903. He was the son, and second of two children, of Philip Grill (1869-1938), a post office clerk, and his wife Katherine (1871-1941) or Katie. His sister was Clara Grill (1898-1967), who was a hair dresser in a beauty parlor. Grill was probably nicknamed “Jack” to distinguish himself from his father with the same first name. The younger Philip Grill appears in the 1930 and 1940 Censuses as an art worker for a newspaper, or as an artist. He never married.

Jack Grill seems to have began obsessively collecting Lovecraftiana in the late 1940s, and the collection he amassed is very impressive. George Wetzel contributed “A Memoir of Jack Grill” to Huitloxopetl, 1972, published by Meade and Penny Frierson, and reprinted in The HPL Supplement #3 (March 1974), also published by the Friersons. The memoir (collected in Wetzel's Collected Essays on H.P. Lovecraft and Others, e-book 2015; but it is worth noting that a slightly different version, with extra potentially controversial comments, appeared in Marginalia #1, Wetzel's contribution to the 26th mailing of the Esoteric Order of Dagon for May 1979) is about ten pages long, and contains some fascinating observations, including quotes from Grill's letters, and an account of their one meeting when Grill came to visit Wetzel. Their friendship, mostly epistolary, went from about 1955 through 1959, when Wetzel notes, Grill stopped answering his letters.

According to Wetzel, Grill “collected HPL photos, letters written to and by HPL; he interviewed HPL acquaintances, visited many of the Middle Atlantic and New England towns to which HPL had made antiquarian tours, and accumulated many other odds and ends of Lovecraftiana.” An odd, shy man, Grill wished he was “a writing fellow,” but his only writings were letters—in an execrable hand-writing, without paragraphs and mostly without dates.

Grill died in Brooklyn on 12 April 1970. His parents and sister had predeceased him. A lawyer had to deal with effects, and arranged an auction at the Brooklyn house. Enter Irving Binkin (1906-1989), one of those typically eccentric old-style book dealers with a good nose for finding rarities. According to an article by Jack Chalker (“Irvin[g] Binkin Meets H.P. Lovecraft” published in Chalker's fapazine Viewpoint no.1, February 1973; reprinted in Alien Critic no. 5, May 1973), Binkin found the house full of hundreds of No-Cal soft drink cartons, filled with books and papers. The lawyer had listed the collection as being on “Love and Love craft” but quickly Binkin realized that it wasn't sex stuff but a massive collection about a person named Lovecraft. Binkin successfully bid on the collection, though the lawyer withheld some of what he thought were personal effects, at least until an heir could possibly be located. Later Binkin acquired these items, which turned out to be more Lovecraft letters and photographs. Having seen the photographs, Binkin realized that Lovecraft had been a regular customer at his bookstore, just off Red Hook in Brooklyn, over forty years earlier. As he read through the collection, Binkin was bit by the Lovecraft bug. Later he would telephone Jack Chalker, because he was the author of The New H.P. Lovecraft Bibliography (1962), and this connection brought about the catalog of the Grill/Binkin Collection, compiled by Mark Owings and Binkin, and published by Chalker's Mirage Press. 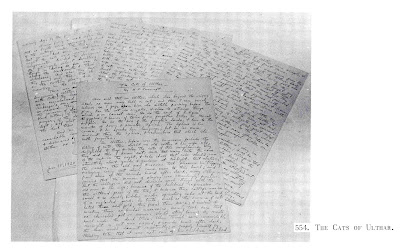 So what was in the Grill/Binkin collection? The main section lists ten Lovecraftian issues of Home Brew, nearly ninety Lovecraftian issues of Weird Tales, and thirteen of the fourteen issues of The Acolyte, a Lovecraftian fanzine edited by Francis Towner Laney from the early 1940s. But the real heart of the collection was in the manuscripts, letters and photographs. A number of these are visible in the twenty pages of photographs in the middle of the catalog: the manuscripts of “The Cats of Ulthar” (dated June 15, 1920) and “Some Dutch Footprints in New England” (1933), as well as Lovecraft's Astronomical Notebook, 1909-1915. Grill seems to have gotten a lot of stuff from Wilfred Blanch Talman, Samuel Loveman, and Cliff and Muriel Eddy, among others. I note that Wetzel, in his memoir of Grill, quotes a letter from Grill (circa June 1957) stating he'd acquired unpublished stories by Hazel Heald, “The Basement Room” (5 pages) and “Lair of the Fungus Death” (25 pages), from Heald herself. But what happened to all this stuff? The Heald stories are not listed in the Grill/Binkin catalog. For “The Cats of Ulthar” I note that in Lovecraft's Collected Fiction: A Variorum Edition (2015), S.T. Joshi remarks about “the absence of a manuscript” (Volume I, p. 151), while as regards “Some Dutch Footprints in New England” in Lovecraft's Collected Essays, Volume 4: Travel (2005), Joshi based the text on the typescript in the John Hay Library but also notes that an autograph manuscript is “also extant” (p. 255).

But where is all of this material now? In the 1975 catalog, Binkin is said to be hoping to sell the whole collection in the future to some library. But did he? Or did he sell some things piecemeal? Or did the collection disappear into some limbo after Binkin's death in November 1989, just as it very nearly did after Grill's death in 1970? Such thoughts provide a cautionary tale for collectors and their collections. However prized and cherished they may be while the collector is alive, what happens to such materials after the collector passes?

Posted by Douglas A. Anderson at 3:00 AM